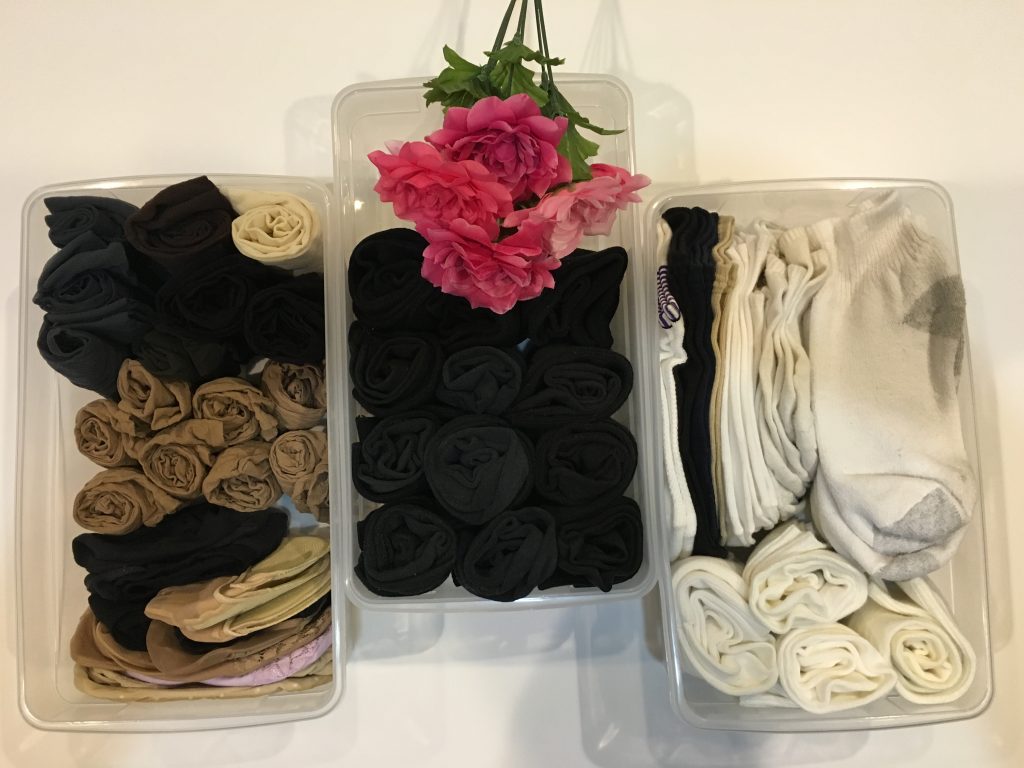 If you’ve read the book and are joining the fray, then you understand that folding is a big part of the KonMari method clothing cleansing/storing experience. Of course, the book I’m referring to is Marie Kondo’s book,  The Life-Changing Magic of Tidying Up: The Japanese Art of Decluttering and Organizing

. And, if you’ve been following along with me on my KonMari journey, then you know that I’ve dealt with the folding issue in some of my previous blog posts.

My first introduction to the KonMari folding method was to watch videos on YouTube. The folding seemed easy enough but I wasn’t sure that it would a) save enough space to be worthwhile and b) keep the clothing from wrinkling.

I can understand the whole bonding with your clothing idea and by touching each piece every time you fold it, you can identify areas that might need repair, or even that the piece of clothing has outlived its usefulness although it still brings you joy. But, I’m still not totally sold on the concept.

Just so you know, I’ve always liked to fold certain clothing items. If it goes in a drawer, it’s folded. I’ve also worked many years in retail and I love the look of perfectly folded displays. However, the KonMari Method suggests a different way of folding clothing which required a tweak to my previous habits.

Mastering the technique is pretty simple. Once you fold a few pieces, you develop a rhythm that sustains you through the pile. It kind of reminds me of when I used to spend an evening ironing. It’s almost like active meditation.

However, I’m the kind of person who likes to hang the majority of my wardrobe. To me, out of sight is out of mind. That may explain why my folded shirt drawers – although they look marvelous! – are in such great condition almost two years after their initial KonMari fold. Since the tops are no longer hanging, I forget I have them and often choose something else while I’m in the closet. On the upside, I was able to fit a large quantity of tops into two drawers which opened up hanging space for new purchases!

I’m not convinced that folding works for everything except dresses, coats and jackets or flowy tops. I feel a lot depends on fabric and frequency of use, and some items are too difficult or small to fold. I suspect that many people who have cleansed their wardrobes with the KonMari method will have relatively minimal wardrobes left so everything will get used regularly. That’s not me!

I opted to fold some items because, as I stated in one of my first posts on this journey, I wanted to more efficiently use the space I had, both in my closet and in my drawers. I have a lot of stuff to fit into a small space, so folding seems to make sense. Once I’ve had a chance to completely redo my closet, I’ll have a better idea of how it all works for me. My closet is supposed to be big enough for two and even after this initial cleaning, I’m having trouble fitting just me in it.

When you watch the videos of KonMari folding, everything looks wonderful when it’s initially folded and the drawer is full. To me, the issue is just how quickly it can get ugly once you start pulling items out. You have to regularly adjust what’s left to keep some semblance of organization.

I’ve seen on blogs several people who have absorbed the KonMari Method of folding, and use it not only at home but to pack their suitcases and set up their hotel rooms. I suspect, now that I’m utilizing this method, I’ll continue to do so for years to come, but I will also hang as much as I can.

I feel your relationship with your clothing is very personal but also something we all struggle with, particularly when it comes to organizing everything. We forget what we have which is why utilizing closet/clothing/style apps help. However, they do take time to maintain and I must admit, I’ve fallen away from using mine. I just have higher priorities at the moment, but I think they’re amazing aids and I wish I had mine updated.

Now, before I digress further, here are a few pointers regarding my KonMari folding experience.

I’d love to hear your comments on how you’re adapting to KonMari folding and organizing your clothing. Leave your comments below!

Next up, more random thoughts and what I’ve learned so far. Join my feed on Bloglovin’ or catch my Instagram posts to keep up to date. 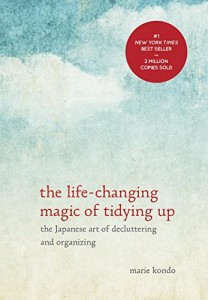 Thank you for coming along with me on this journey and I do apologize for the lapse between posts, but once you get started on this journey, it seems to take on a life of its own. I’m further along than my posts indicate, and I’m putting a lot of thought and analysis into what I post, so it’s taking me a bit longer to get my info out than some others might. However, I do hope that we both learn along the way!

When we last visited, I had just begun working my way through the categories as recommended in the book,  The Life-Changing Magic of Tidying Up: The Japanese Art of Decluttering and Organizing by Marie Kondo

. Clothing is first up, and I did my energy test of my t-shirts, to see if I could feel the joy with my eyes closed. You can read the post here.

Next it was time to tackle tops. I hate to admit it, but even though I seemed to have quite a few in my closet, i gravitated to the same dozen or so and wore them over and over again. I’m sure everyone was sick of seeing me in the same ones, but I really liked the way I looked in them and they were quite comfortable. It’s hard to argue with comfort.

However, as the book title states, this process is supposed to be life changing, so it was time for me to take a hard look at exactly what was on those hangers!

I began with my winter season tops as it was the heat of the summer when I was doing this, so long-sleeved sweaters were the last thing on my mind and probably the easiest to form an objective opinion about. In fact, Kondo suggests working on your off-season clothing first. Makes total sense.

I got a little cocky after my t-shirt experiment and decided just to hold the hangers, not the actual clothing, as I made my decision. I quickly went through my winter tops as I don’t have that many living here in the desert, sorting by what to keep versus what to discard. This time, I took a more objective stance and made the choice simply by whether or not it had been worn enough times to make it in the record books. Yes, even if something brings you joy, at some point you must thank it for its wonderful service and pass it on.

I initially discarded about 20 percent of my winter tops, then hung the remainder back in my closet. My clothes are always organized by color within each category in my closet, and as I was hanging them, i realized I could part with a few more. Once they were all hung, I pulled out even more. It seemed as if my closet was creating a certain look – hopefully, my look – and those items that no longer fit really stood out. I ultimately went through my winter tops about four times. Probably would have been easier to do it the KonMari way in the first place.

In the end, 45 percent of my winter tops found their way into the discards. Unfortunately, I was so busy playing the hanger game I neglected to take photos at the start of this category. Here are the keepers. 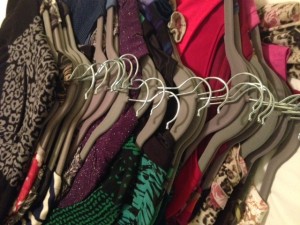 Here are my joyous winter tops, no ugly Christmas sweaters in the bunch!

Once winter tops were out of the way, it was time to address all my three-season tops. Here, again, I found that I was wearing the same few over and over again..

I decided this time to take them off the hangers to sort them properly. As I was deciding which brought joy and which should hit the discard pile, i realized i had several i didn’t even know I owned! In fact, price tags were still dangling from the seams. So, I actually had to make a third pile – try-ons – to determine which could stay and which could go.

As it turned out, i kept over half of the tops with tags. As for the rest, even if they fit and were in good condition, if they didn’t bring a smile to my face, i bid them adieu.

Overall, i released 41 percent of my three-season tops into the universe. 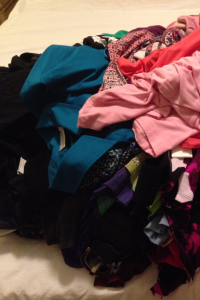 Then came the basics: camis, tamis and tanks. This category took up a big section of my closet, but after reading Kondo’s book, I decided i would fold these and place them in a drawer.

When they hung in my closet, i grouped them by color rather than style with the mindset that they all go under some other article of clothing – from a top to a jacket – so I would probably decide on color then select a style. Well, I’ve had a change of heart and decided to separate them by category, then color, when I folded them in my drawer. As it turns out, I didn’t realize I had certain items because of the fact they were colorized not categorized.

As these are basics, I can’t really say they offer any overabundance of joy. I use them as needed. So, i turned on the big overhead light in my bedroom and checked for condition. I had a number of new ones here with tags still on, but several had seen only one or two uses. i kept 69 percent, and spent several minutes folding and categorizing them for the drawer. Don’t they look pretty? 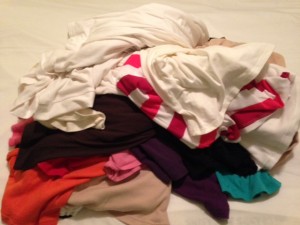 Here’s the mess of camis, tamis and tanks before the big folding session. 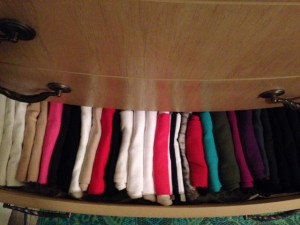 Here they are all nestled in the drawer. Even using Huggable Hangers, I save a lot of closet space by folding them.

I highly recommend using the brightest light you can when making these clothing decisions. Harsh lighting exposes a multitude of sins. Besides, if something brings you joy under those circumstances, just think how happy you’ll be in candlelight!

Now that tops are done, what category will I do next? Come back and see!